Dr. John Mather is the Senior Project Scientist for the James Webb Space Telescope. Dr. Mather shares the 2006 Nobel Prize for Physics with George F. Smoot of the University of California for their work using the COBE satellite to measure the heat radiation from the Big Bang.

The concept of the Big Bang is both simple and easy to misunderstand. Dr. John Mather, Nobel Laureate and James Webb Space Telescope Senior Project Scientist, answers some commonly asked questions about the Big Bang, and about JWST's role in understanding the early history of the universe.

What is the Big Bang?

The Big Bang is a really misleading name for the expanding universe that we see. We see an infinite universe expanding into itself. The name Big Bang conveys the idea of a firecracker exploding at a time and a place - with a center. The universe doesn't have a center. The Big Bang happened everywhere at once and was a process happening in time, not a point in time. We know this because 1) we see galaxies rushing away from each other, not from a central point and 2) we see the heat that was left over from early times, and that heat uniformly fills the universe.

Can we see the Big Bang?

No, the Big Bang itself is not something we can see.

What can we see?

We can see the heat that was there at about 380,000 years after the expansion of the universe began 13.8 billion years ago (which is what we refer to as the Big Bang). This heat covers the entire sky and fills the universe. (In fact it still does.) We were able to map it with satellites we (NASA and ESA) built called the Cosmic Background Explorer (COBE), the Wilkinson Microwave Anisotropy Probe (WMAP), and Planck. The universe at this point was extremely smooth, with only tiny ripples in temperature.

I heard the James Webb Space Telescope will see back further than ever before. What will JWST see? 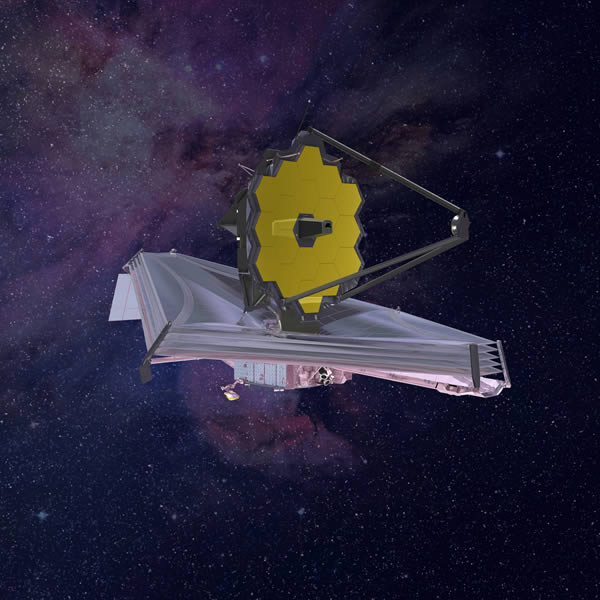 COBE, WMAP, and Planck all saw further back than JWST, though it's true that JWST will see farther back than Hubble. JWST was designed not to see the beginnings of the universe, but to see a period of the universe's history that we have not seen yet before. Specifically we want to see the first objects that formed as the universe cooled down after the Big Bang. That time period is perhaps hundreds of millions of years later than the one COBE, WMAP, and Planck were built to see. We think that the tiny ripples of temperature they observed were the seeds that eventually grew into galaxies. We don't know exactly when the universe made the first stars and galaxies - or how for that matter. That is what we are building JWST to help answer.

Why can't Hubble see the first stars and galaxies forming?

The only way we can see back to the time when these objects were forming is to look very far away. Hubble isn't big enough or cold enough to see the faint heat signals of these objects that are so far away.

Why do we want to see the first stars and galaxies forming?

The chemical elements of life were first produced in the first generation of stars after the Big Bang. We are here today because of them - and we want to better understand how that came to be! We have ideas, we have predictions, but we don't know. One way or another the first stars must have influenced our own history, beginning with stirring up everything and producing the other chemical elements besides hydrogen and helium. So if we really want to know where our atoms came from, and how the little planet Earth came to be capable of supporting life, we need to measure what happened at the beginning.

John Mather writes about misconceptions about the Big Bang on theedge.org. His essay complements this interview.